Holistic steam trap and vacuum system overhaul saves the multifamily complex $32,000+ annually Kingsview Homes, a residential complex in Brooklyn consisting of one central heating plant that serves all five of its buildings, hired EN-POWER GROUP to act as a technical advisor for their aging heating distribution system. Our engineers teamed up with the system’s original designer, GS Dunham, to identify and implement improvements to reduce the complex’s high natural gas bills. Working together to overhaul the entire system’s steam traps, pumps, and controls enabled Kingsview Homes to reduce their total gas use by 13%, save $77,700 annually, and greatly improve resident comfort. 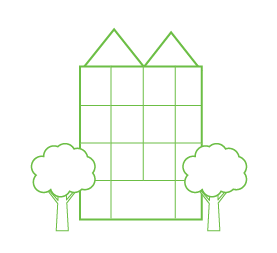 The energy auditing and retro-commissioning not only helped the property comply with NYC Local Law 87 compliance but also prepare the property for Local Law 97, which mandates buildings to meet specified carbon emission limits or pay penalties. Because of the comprehensive assessments of all buildings in the Kingsview complex, EN-POWER identified issues with the heating distribution systems and overhauled the system, resulting in an annual 162-metric ton carbon reduction and an improved ENERGY STAR Score.

Originally Kingsview Homes had hired EN-POWER to conduct its NYC Local Law 87 energy study and retro-commissioning. Our engineers discovered the facility’s aging heating steam distribution system was having major performance issues: uneven heating that left some residents cold while others were so overheated they had to open their windows in the winter, inefficient boiler operation resulting in high natural gas bills, and maintenance problems that caused extra work for building staff. Detailed testing conducted during retro-commissioning revealed the complex has a large number of broken and missing steam traps (i.e., the devices used to regulate steam in the distribution system), pumps that failed to achieve needed vacuum pressures, and condensate system drainage issues. At the conclusion of the energy study, EN-POWER teamed up with the system’s original designer, GS Dunham, to implement the repairs and upgrades needed to holistically overhaul the system back to health. Working together, our teams helped the complex successfully:

As a result of this holistic overhaul, the complex was able to reduce its natural gas consumption by 13%, which translates to a total cost savings of $77,700 and 162 metric tons of carbon annually. Resident comfort was also greatly improved as now steam is being distributed more efficiently through the system and apartments are more evenly heated.

​Ck here to download or print this case study